Your doctor will recommend the best treatment option based on the stage of your melanoma, together with other factors such as your age and general health.

Melanoma is staged as O, I, II, III or IV. It can also have a substage (a-d). The following table outlines the different stages of melanoma, and relevant treatment pathways:

The most common treatment for Stage 0, I or II (early stage) melanoma is surgery. If caught early, 90% of melanomas can be cured with simple surgery alone.

If you have been diagnosed with Stage III or IV (advanced) melanoma you may be recommended to have a combination of different treatments including surgery, drug therapy, and radiation.

Melanoma research is fast-paced and is focused on ﬁnding new and more effective treatments. Access to these new treatments is dependent on the results of clinical trials and approval by government bodies such as the Therapeutic Goods Administration (TGA), which licenses drugs for use in Australia, and the Pharmaceutical Beneﬁts Scheme (PBS), which subsidises the cost of certain drugs for patients.

To support you on your melanoma journey we have created guides for each stage of melanoma. Download our Patient Information Guides. 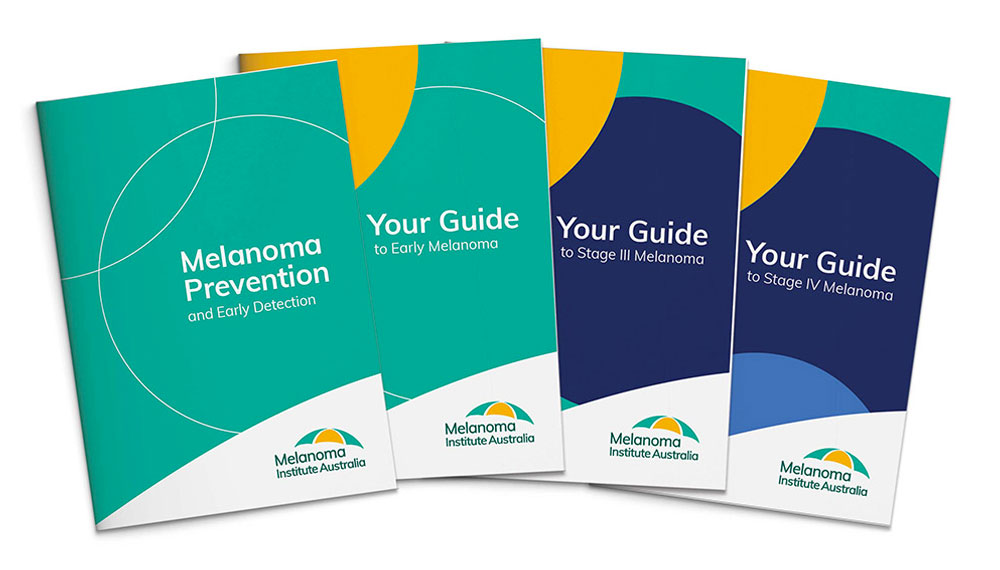 Or watch our video, Early Stage Melanoma: Your Questions Answered

Please note that the content was accurate at time of publishing (August 2021) but may not reﬂect the rapidly evolving treatment landscape and approvals in Australia.

Surgery is the most common treatment for melanoma, however its purpose varies depending on how far the cancer has progressed.

For early stage melanoma, a biopsy may be all that’s required i.e. removal of the tumour by excising it. A wide local excision may also be required, where the skin surrounding the melanoma is removed to reduce the risk of the melanoma recurring.

For later stage melanoma, surgery is used as a diagnostic tool to assess how far the cancer has spread. Patients may require surgery to remove lymph nodes.

Even though an initial biopsy often removes all the recognisable melanoma, wide local re-excision is usually recommended to further reduce the risk of the melanoma recurring. This involves removing the melanocytes adjacent to the melanoma that may be susceptible to turning into melanoma themselves.

A wide local excision usually removes a 1-2cm margin around the site of the original melanoma, however this amount varies depending on the depth of the tumour and how far it has spread into the lower layers of the skin. Most wide local excisions are closed with stitches, however larger excisions may require skin grafts or skin ﬂaps.

The sentinel node is removed and sent to a pathologist who assesses whether malignant cells are present. Malignant cells are an indicator of the risk that melanoma may have spread to other parts of the body. CT and/or MRI scans may be appropriate.

There are three main types of lymph node dissection:

A medical oncologist is a doctor who specialises in drug therapy and will plan and monitor you during your treatment. Drug therapy can be neoadjuvant (before surgery) or adjuvant (after surgery) with the treatment option best for you determined by your disease stage and other health factors.

Targeted therapies are drugs that block the growth of cancer by interfering with speciﬁc gene mutations in melanoma cells that allow melanoma to grow and spread. This is different to non-speciﬁc treatments, like chemotherapy, that simply aim to kill rapidly dividing cells. It is suitable for you if your melanoma has a speciﬁc gene mutation.

Researchers have identiﬁed a key genetic mutation that drives the growth of melanoma in approximately 40% of patients. It is known as BRAF (“BEEraff”). Another type of gene, called MEK, works together with the BRAF gene to drive melanoma growth.

There is a targeted therapy combination that is available on the PBS for patients with a BRAF-mutation. This regimen combines a drug that targets the BRAF gene mutation (BRAF inhibitor called dabrafenib) with a drug that blocks the MEK gene (MEK inhibitor called trametinib). This combination targeted therapy has been found to be more effective for shrinking melanoma tumours than using either type of drug on its own.

More gene mutations in melanoma cells are continuing to be discovered and new treatments speciﬁc to these mutations are in development and being tested in clinical trials.

Your healthcare team will discuss with you whether targeted therapy may be relevant to you.

Immunotherapy (also known as immune therapy) works by activating the body’s own immune system to seek out and ﬁght melanoma cells. Immunotherapy can be effective in shrinking melanoma metastases in advanced melanoma patients and reducing the risk of melanoma recurrence, regardless of your genetic mutation test result.

One type of immunotherapy currently available to treat Stage III and IV melanoma are checkpoint inhibitors. These drugs block proteins on the surface of immune cells that usually stop the body’s immune system from identifying and killing the cancer cells. When these proteins are blocked, your immune system’s ability to kill the cancer cells is increased.

Other immunotherapies are being tested in clinical trials involving advanced and early stage melanoma patients. Speak with your healthcare team to ﬁnd out about any new advances in immunotherapy that may be relevant to you.

Since radiation therapy damages normal cells as well as cancer cells, treatment must be carefully planned to allow the normal cells to repair themselves and minimise side effects.

A radiation oncologist is a doctor who specialises in radiation therapy and will plan and monitor your treatment. The total dose of radiation and the number of treatments you need will depend on the size and location of your melanoma, your general health and other medical treatments you’re receiving.

Radiation therapy may be given on its own, after surgery or in combination with another drug therapy.

WHAT IS MELANOMA?
READ MORE ABOUT HOW MELANOMA IS DIAGNOSED
Page load link
Go to Top