As the first half of 2022 draws to an end we want to acknowledge and thank our incredible community fundraisers who have made amazing efforts to support our mission to reach zero deaths from melanoma. The easing of COVID-19 restrictions has seen the return of many large and small scale community fundraising events.

Two Perth teams swam in the Rottnest Channel Swim in honour of Tom Leishman. Tom was a popular and respected teenager who sadly lost his three year fight with melanoma on 12th January 2017, aged 18 years. Tom’s sister Alannah created Team Swim4Skin, and four of Tom’s friends swam as Team Leishman. Together they raised $15,535. 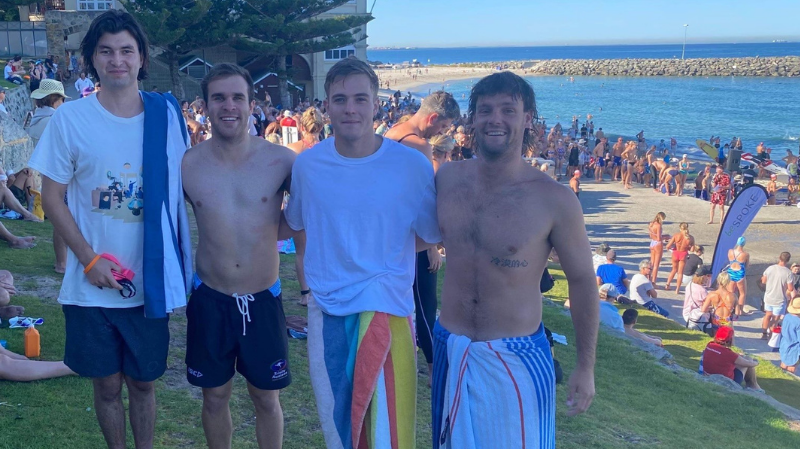 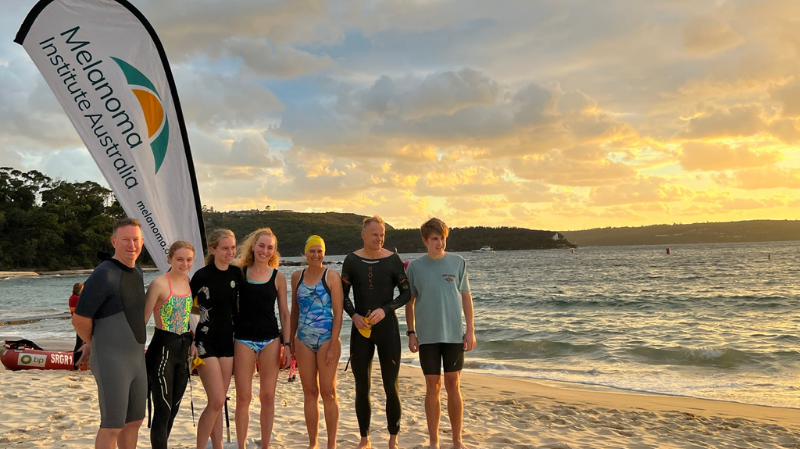 In February Monika Mather organised the annual Erik Mather 2-4-6 km Swim at Balmoral Beach to honour her brother Erik, who lost his life to melanoma aged 45. This iconic swim raises funds for MIA’s Erik Mather PhD Scholarship for melanoma research. A crew from MIA – including Matthew Browne, Prof Georgina Long AO, Prof Anne Cust and Prof Richard Scolyer AO – took part in the swim.
Congratulations and a huge thank you to Matt Kean and his fellow cyclists on the completion of Riverina Melanoma Ride 2022!
What an amazing achievement, riding for eight days around the Riverina, cycling over 1000 km and raising awareness by visiting so many schools leading up to the ride and then along the way! Thank you also to everyone who who donated to, and supported, the ride which raised close to $70,000. 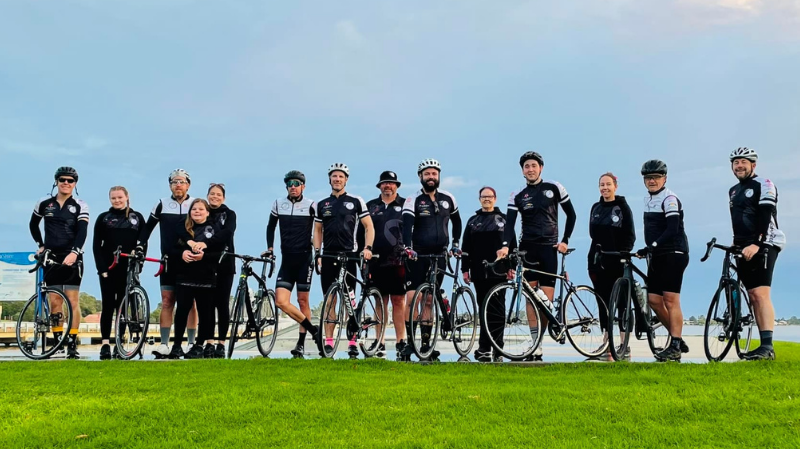 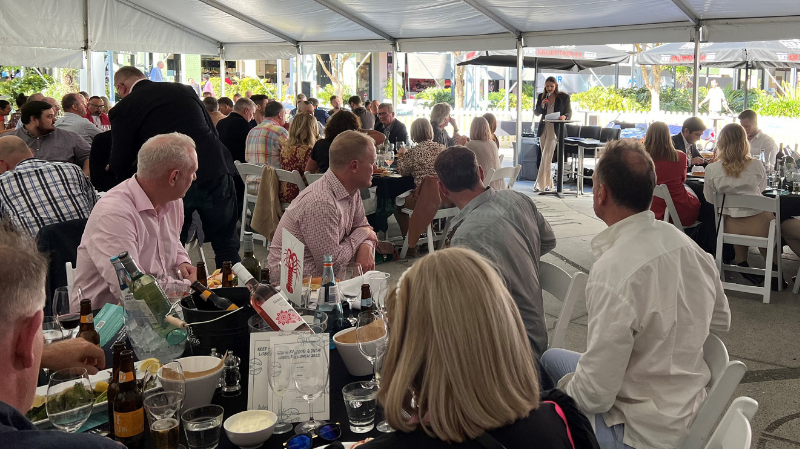 At the Lobster Lunch in Brisbane it was an afternoon of lobsters, laughs and love as Gina Savage told her emotional personal melanoma story and guests rallied to support MIA’s research. The room was also wowed by the anecdotes from Australian cricket legends Shane Watson and Jimmy Maher about their days on tour. Big thanks to Ryan and Claudia from Reef Seafood + Sushi Gasworks, and everyone who dug deep to help raise over $10,000.

Graham Shackles and the Secret Harbour Surf Life Saving Club (WA) gathered their young surfing community together at the end of Nippers Season for the Graham Shackles Beard Shave – where Graham shaved off his long beard in support of melanoma research. In 2012 Graham had a level IV melanoma removed from his central upper back. Sadly his mother wasn’t as fortunate & passed away  in 1996 from a missed melanoma. Graham does all he can to raise awareness. Thank you to Graham and the Secret Harbour Surf Life Saving Club for holding a successful event and promoting sun safety to your young community. Graham raised $2843. 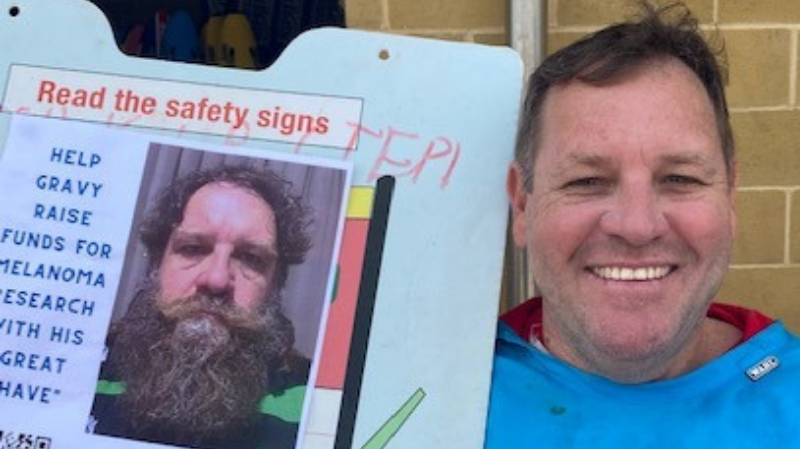 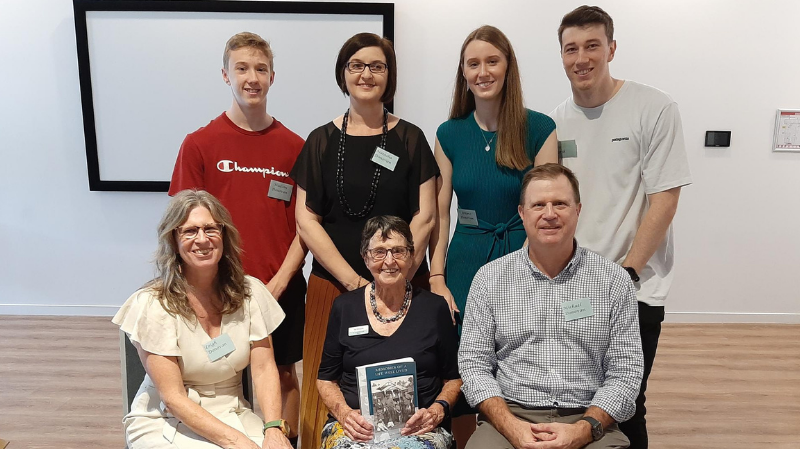 During COVID, historian, Valerie Donovan, decided to write and publish her memoirs entitled A Memory of a Life Well Lived. Her book launch took place almost 5 years to the day that she lost her husband, John to melanoma. In honour of John’s memory, all proceeds from the sale of her book were donated to MIA. Valerie raised $5255.

The Wantima Country Club held their Ladies Annual Cancer Charity Day, supporting Melanoma Institute Australia. There was a wonderful turnout of 126 golfers and the enjoyable event – which included an 18 hole competition, lunch, fundraising activities and raffles –  raised over $3000. Here’s a pic of the winners – we’re impressed with their sun protective sleeves! 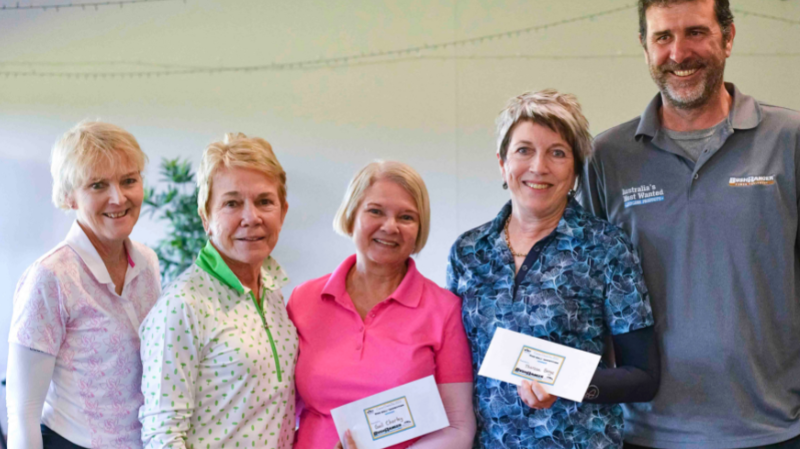 The Wagga community have held a number of community fundraisers over the past 6 months and are always well supported. These include Wagga Golf Day raising $1895; Wagga Gun Club Raffle and NRL Lunch raising $2125.

For Erin’s Big Chop, Erin chopped 20cm off her waist length hair and donated it to a wig maker to make wigs for children who have lost their hair as a result of cancer treatment and she did some fundraising for MIA at the same time, in support of her dad. Erin raised $590.

The Newstead Football and Netball Club held a melanoma fundraiser to honour a club member lost to melanoma, and raised over $1200.

The Muirfield Golf Club Ladies Charity Day was held for the third year and raised $5000. The fundraiser involved a day of golf, raffles & a cake stall in support of members and their families affected by skin cancer.

In memory of his mother in law Karen Knuckey, who passed away in December 2020, Jay Jay Abbott shaved his head for the first time and raised $2425.

Popular influencer and surfer Alex Hayes launched his own Fishbowl for the Fishbowl franchise in Manly, and donated a portion of the proceeds to MIA.

Darren Garrison challenged himself in Ultra Trail Australia 100km Run, raising $730 in support of Sarah who was diagnosed with melanoma in September 2021, requiring three surgeries for three separate melanomas.

In honour of Morgan Mansell, who lost her life to melanoma, her father Peter promoted Check4Spots Day on 30th January, and secured a grant of $500 for MIA.

We wish to thank the many family members and friends of those who have raised funds in memory of loved ones lost to continue their legacy:

In Memory of Joanna Katherine Simmonds

In Memory of Lionel McGuire

In Memory of Kerri Anne Hilton

In Memory of Fran Liddle

In Memory of James Muir

In Memory of Emma – 10 Year Anniversary. Kim and Darryl Stedman created a 10 year anniversary fundraiser in memory of their daughter Emma.